“AWESOME! Richard does a remarkable job entertaining everyone” 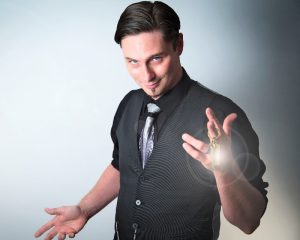 One by One, they start dancing. And everyone starts laughing.

Comedy Hypnotist Richard E Darshwood guides his subjects through many assorted tests and skits in a squeaky clean presentation of hypnosis as you have never seen before.

Richard E. Darshwood is a professional entertainer – who specializes in hypnosis and sleight of hand artistry. His sensational skill set has won him several awards within the magic community and has taken him to the far side of the earth. Unlike many performing hypnotists, Darshwood has been trained and certified.

Laugh Out Loud with Richard’s extremely polished full hour show called the Mind Games Comedy Hypnosis Show – which is actually themed like a game show where the kids not only believe they’ve won lots of cold hard cash but also a BRAND NEW CAR!

“Everyone is asking – ‘When will he be back again?'”

“I loved that he was very inclusive. Everyone got to be involved but no one felt like they were put on the spot.  Very easy to work with and adapts to the surroundings. He is both professional and personable.” – T. Hoffman, Whitaker Bank

Make Darshwood a part of your group’s stories they will tell for a lifetime. You have my undivided attention, making your job easier.

If you prefer email, use the quick email form below.